The two older momma cats had kittens about a month ago. I normally don’t interfere in animal birthing unless there’s an obvious problem, because their instincts usually know best. One had hers in a sensible location, a shelf in the basement inside sort of a frame that kept them from falling off. The other one didn’t. She picked a small shelf over the basement stairs, so the kittens could immediately fall about 8 feet.

I found two of them after it was already too late for them, but she had one nursing. Then that one disappeared, so I thought she’d moved it to a safer place. After a while, though, I noticed she was following me around and acting out of sorts. She seemed to be making a nest in an old blanket on the porch, but there were no kittens there. Then I found the missing kitten where he must have fallen to the basement floor and crawled behind a box. He must have been there for at least a day.

He barely showed any signs of life, but I went and got his mama and made her smell him. She didn’t seem interested. So I took him to her nest on the porch, and then she started licking him. A day later he was gone again, so I thought he probably died. Then I noticed a couple times when I was in the basement, she came down the stairs, and I followed her back to a hole in the wall to the space under the bathtub. She’d moved him in there.

He mewled under there once in a while at first, but I hadn’t heard him in a long time, so again I thought he’d died. Yesterday I opened the basement door, and there were kitten and cat poking their heads out of the hole. It looked like she wanted to bring him out of there, but couldn’t make the jump to the stairs while carrying him. So I got a box and put some paper in it, and stuck them in the box next to the stairs.

Then he disappeared again, and I found him on the stairs going out of the basement. She must have been trying to take him outside somewhere and lost him along the way. Back to the box. In my mind, he’s already used up half his lives, but if he manages to survive this quality of mothering, he’s going to be one tough cat.

Here’s the other litter waiting for Momma to come back. Free kittens in T-minus two months, give or take. I haven’t counted boys and girls yet, because I respect their privacy (what’s that from?). As usual, I can’t take a decent picture indoors.

This was 2-3 weeks ago when we had that three inches of snow out of nowhere. It didn’t last long, but long enough to get a picture of the first asparagus sticking up through it.

The chickens like to be near some cover most of the time. Fear of hawks, I guess. So lately they’ve been hanging out near the pile I’ve been stacking up for a cookout.

I’ve been trying to decide where to put the new chicks this year, and time is running short to get them. I’ve had them in the basement before, and that worked okay, but I took down that pen to stack firewood there, and I didn’t want to have to put it back up. Wherever they go has to be cat-tight on top of coon-tight, which makes it tough. I thought about building a pen in the barn and running an extension cord out there for the heat lamps, but then I’d be up a couple times a night to make sure they stayed on.

Then I thought of this little chicken house I built a dozen years ago. I never expected it to last this long, and it’s been settling into the ground where it was sitting unused for eight years now. But I figured if I could drag it up near the house and make it tight, I could run an extension cord to it and have it close enough that I could look out from the house to check on it at night.

The bicycle wheels were so I could move it around the yard with a portable pen and keep the chickens from killing out one patch of grass. It’s heavy enough that it wasn’t easy to move, but it worked back then. There was no chance of moving it by hand this time, though. So I pried it up enough to get a rope under the front corners and around the back, and started pulling. Once it came loose from the ground, it actually went pretty well. The bottom is a 3/4-inch piece of plywood, and it hasn’t fallen apart yet. Now I just need to make sure everything is secure, and it’ll be ready for chicks. 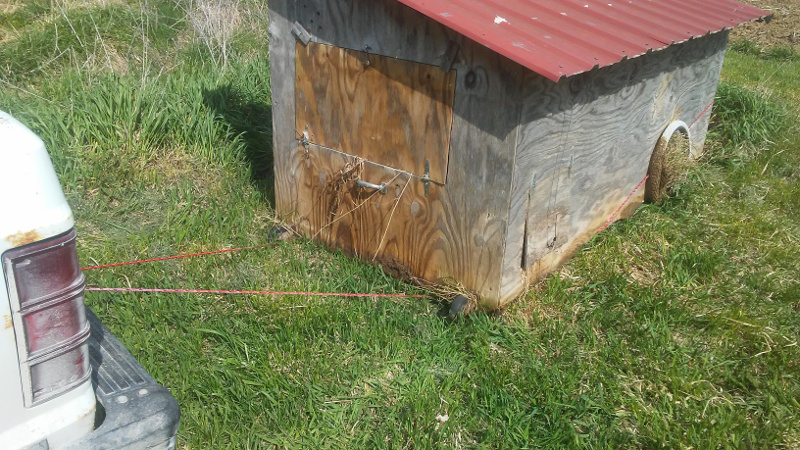 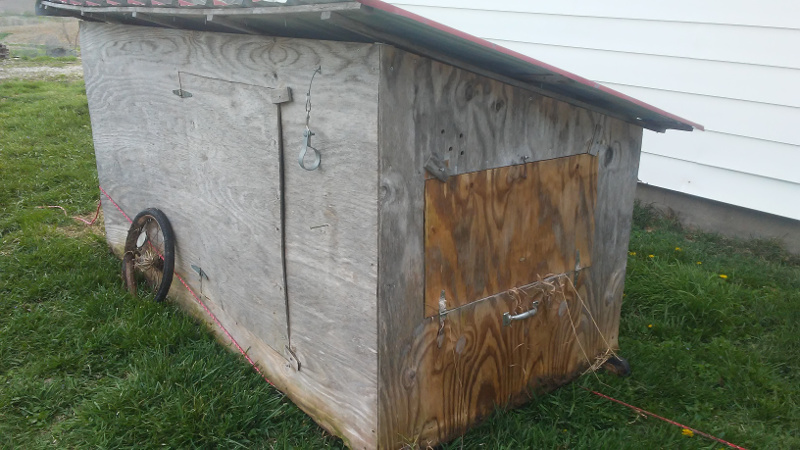